The Year Of Living Differently-Ashland 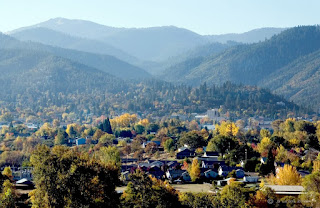 Since I've moved to Ashland, I haven't really spent a lot of time writing or telling stories about the journey. I've been super busy with work, with Woodhull's Sexual Freedom Summit and trying to unpack. So I thought I'd tell you a bit about the region, if it's a story you'd care to hear.

Ashland is part of the Rogue Valley which encompasses Jackson and Josephine counties and the cities of Grant's Pass, Central Point, Medford, Phoenix, Talent, Ashland for a combined population of (and I'm guesstimating) 200,000. Ashland has about 20k and Medford about 70K.

The Rogue River runs through the valley and is a gorgeous rough water destination that people raft down, paddle in, and generally freeze their ass in because it's goddamn cold. Nearby-ish is the profoundly beautiful Crater Lake, and Mount McLoughlin for hiking, as well as numerous mountain lakes and reservoirs near the Pacific Crest Trail.

Fun fact, we went for a walk downtown today and came across a dude who had walked down from the PCT and everyone cheered for him.
Ashland is home to the Oregon Shakespeare Festival and is an adorable town. It's cute and precious and has views on one side of big green mountains (to the west) and rolling tan velvet looking hills to the east (which on the other side of which is Eastern Oregon.

It's also filled with Jackson Hot Springs and a lot of 60's age hippies and 70's age wanderers, and modern age seekers who like Kombucha, hot yoga, art, and seasonal weather. Unlike Eugene or Portland, Ashland has 4 distinct seasons. Right now? It's 105 but 30% humidity and about 55 at night. It snows in the winter. I expect chilly air, boots, and hot cider come Halloween. There is a huge Halloween parade. Ashland loves parades.

Medford and the region are known for Harry and David. And pears. There is a spring pear festival which I hear is really super fun. I had pears today in my salad at Sunrise Cafe which is a Hawaiian joint right in DT Medford.

Small town life is quieter and there is no traffic. There also are no late night diners or 24 hour grocery stores (unless I've missed something) I think there are places like that in Medford. Pizza is still a puzzle. There are loads of bougie wonderful foodie restaurants with names like Alchemy and Amuse. I am happy about this and intend to spend a lot of money there.

Ashland has epic parades, as mentioned above. SO PRIDE is in October and apparently it kicks ass. BPC will, with any luck be performing.
There are few mosquitoes, and fewer flies. Not that many wasps that I can see but loads of honeybees. The Ashland Goddess Temple is devoted to bee-keeping so that's cool.

There are however, spiders. Lots of them. Like..every morning there are silvery frothy webs in all the bushes and plant life even though I rarely see the spiders. The spiders I do see are black widows and they live under rocks and on the back sides of houses and general have ugly ass nests that scream DON'T COME OVER HERE. I don't. I avoid them at all costs.

Lavender plants are ubiquitous. I mean...everyone has them all over everything, along with rosemary, and succulents. But seriously, if you like lavender, Ashland is your jam.

And deer. There are deer. There may be more deer than people as there are very few natural predators. They just amble about having lunch on various plants. They walk down the street. They hang out in the front yard. They look at you like....what? We have one buck in the neighborhood that I've dubbed Mr. Tumnus because while he's not a faun, he was a fawn. And there is a lamppost right next to our house so I wonder.

There was a deer that somehow got all caught up in the 4th of July parade (see?) and nearly lost it's mind trying to figure out how to get out.

The deer hate lavender so there may be a connection with its popularity.

Oregon is a very white state. Medford was one of the first places to initiate a KKK person in Oregon. Oregon had sundown laws on the books for a long time. The first black actress at OSF had to be escorted in and out due to those laws. OSF? The Oregon Shakespeare Festival is doing huge amazing things with intersectional theater making and I love them. The city has had two Unpacking Racism meetings with 200 people per event and they have been GREAT.

It's beautiful here, achingly so. I feel healthier than I have in a long long time which makes me feel a bit guilty to say, but who can deny health?

We'd welcome visitors. We have our own little airport in Medford and everything!