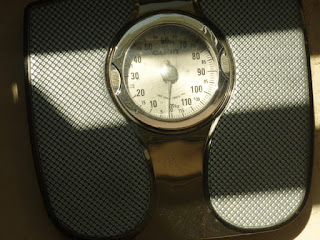 I used to have a world class clavicle.

Memory 1: I am 13 or 14. My dance teacher reports that my body is wrong for ballet - too large of butt, too stocky of thigh. I am sad and I cry as I tell my mother. She says offhandedly as if issuing a casual curse, “Well you do have a full behind. Don’t ever gain weight because you’ll never lose it.”

I grew up a slender child, but puberty was not entirely fair. I got aforementioned full backside and strong thighs but no breasts whatsoever. I was, much to my mother’s happiness, thin in most of the ways that appealed to her.  No boobs, but I figured I could make up for it in other ways.

In my 30’s, I used to use the coy phrase, “I have a world class clavicle.” I liked this description because I could comment on my body in a sexy, yet, non sexual way. I figured it would attract a person who might be curious about what exactly that meant.

And what it meant was the space between bone and shoulder was hollowed out enough to fit a little champagne cup in. I could pose like the models, you know, enough bone to prove I was thin even if I wasn’t traditionally sexy. The Dior New Look. My clavicle, singular, as if that was the only body part I could recommend. I got lovely compliments about the path from clavicle to gentle cleavage. I enjoyed that.

Caveat 1: This piece is not a fishing expedition. This is not self pity. This story, if you stick with it, has a different purpose.

Memory 2: I am in my first college play. The production is Grease. still committed to dancing, I’ve been aged for the “Rydell High reunion” wearing wrinkles and an unflattering costume. Afterward I seek out my mother for praise. She hugs me and says, “Your butt looked pretty big in that costume, better watch it.” I wasn’t shocked by this at this time, a comment like that. It became a pattern with us, this fusion combined with distance as if the only love she could give was sideways, on the sly.

I did watch it for a damn long time and things were fine until a few years ago when my clavicle went AWOL. So I did what I always did. You know the drill, cut your intake, increase your output. I took up running. Gained weight. Did paleo. Gained weight. Went back veggie. Gained weight. Got plantar fasciitis and couldn’t walk/run. Gained weight. Little bits, over time that stubborn weight stayed on. I got my thyroid checked and checked again. I asked various and sundry doctors and heard repeatedly “you are just getting older.” Older sure, but I was doing the work. And when you do the work and get no response it feels like treachery to me.

This may seem silly to you, a woman of hard work, good productions, supportive of activism, worrying about something seemingly trivial, so unfeminist.... I know. It seems trivial to me as well. I mean, it is trivial. And complaints very ill placed in the big picture. But missing my clavicle, was like misplacing a magical charm that secured my identity as desirable and in control.

It’s amazing what we hold as a magic symbol, yes? Literal and figurative we hold these powers over each other, against each other, and create magical thinking about who we are based on beliefs rooted in our observations and our family histories. Our mirrors are intricate and layered.

Memory 3: Even in her 60’s my mother smokes and eats quite little to keep her body small. The rest of her family is bigger boned and heavier than she. Her difference is the only currency she has, the only way to win some kind of invisible unheard argument between siblings. It is her magic spell.

After college, we are the same height and size. But she has more length in her legs. She holds this inch of femur over me. Every time I visit, or we drive in the same car, she notes it “Oh I have to push the seat back, my legs are so much longer than yours.” and so forth- her length, thus her herself, superior. I come to expect her commentary and welcome it if only to get it over with. She may have legs, but I do have my clavicle.

My husband, who is loving and gracious and wise, pointed out once that the times I was the thinnest, were the times I was the most despairing.
---After a horrific breakup with first real love-my sexuality, going from girl to woman, undoing me into denying my body.
---After having my first child, I was in the grips of postpartum depression-motherhood literally consuming me.
---After moving my mother here with Azheimer’s.  I was responsible for all her things, her life. I had two small children, a husband in school, and a mother to care for. I withered away alongside her. Her slimness from illness, mine? Not enough nurturing to go around.

Caveat 2: I am not judging anyone’s body but mine and in fact, the women I have loved were lush and full and powerfully bodied. They were present and comfortable in their flesh in a way I couldn’t be.

Memory 4: We are in Athens trying to get my Mom to see a doctor for a coloNOscopy. Besides the Alzheimer’s, something is wrong. She is rail thin and cannot eat without vomiting.  She weighs 105 pounds and I tell her this. She smiles, prideful. I get on the scale later myself.

Years went by, Alzheimer’s and pneumonia finally overtook her and she died the summer of 2013. I was spent from years of caretaking, from grieving in slow motion. Mentally, I was all over the place, pouring manic emotional energy into activism and online work. Physically, though, I moved little: from couch to car to desk to car to bed as if I was using all my energy to hold off grief. I was building an emotional wall of WORK and PROJECTS and INVOLVEMENT which drained any other ability to move. I noticed my bones, once prominent, fading into a background of flesh.

When I went to picked up her ashes, I was stunned at their heft. A box filled up with a person - heavy, dark, a cube shaped black hole made up of my mother, absorbing my light and attempts to leave her orbit.

She sat on a shelf hidden in the back of a closet for a full year before I had the nerve to hold her memorial. Over that year, I pulled the box out occasionally, just to say hello, apologize, listen? I could feel her glare piercing through the cardboard at me. I’d glare back at her, then down at my body and compare. I’d hold her weight in my hands and allow my guilt to simmer. But only for a minute. Shut the closet door. Back to work.

I released her ashes in 2014. After, the memorial I thought that magically the my clavicle would become visible again. But instead, my lethargy persisted, deeper still, unyielding, a kind of depression that not many but those closest to me would be able to observe. I felt like the main character in the horror film Shutter, the murderer literally carrying his guilt, the ghost of the betrayed on his back bearing down, weighing on him in pain and pressure.

Memory 5: During the final stages of Alzheimer’s she eats with abandon and without restriction or guilt. Every meal, every day. Snacks even! She becomes fuller, heavier. She takes up space and is blissfully unaware of her size. If she had known, she would have been appalled, filled with loathing, and furious with me for letting it, any of it and all of it happen. “You let me get me fat,” she would have said, “You put me in a home.” Looking back, if I’m honest, I gained most of my weight during the same period.

Maybe it was a psychic penance, guilt I carried for not keeping her safe from Alzheimer’s or keeping her out of the nursing home. An undiscovered mirror neuron response, a quantum mechanical emotional umbilical cord never truly cut?  Possibly it was a cry for acceptance manifesting in flesh- thin when she was thin or heavy when she was heavy, staying close to her in the only way I could, the only way she would allow, sideways and on the sly.

Caveat 3: I am not a physicist or psychic so what I just said is probably bullshit but it feels right.

I’m not sure what changed on the second anniversary of her death. Perhaps there is only so much burden a body could bear, or perhaps I just decided somewhere inside myself that I wasn’t guilty or responsible for her illness. Perhaps she decided to lift off and go and therefore removing the bulk of her expectations on me.

I felt different. I felt my body. I felt like moving and not for the purpose of slimming down to have my clavicle back. Still. I wondered about the path of it all. Sure, my gaining could be tied to aging and a slowing metabolism and peri menopause, but maybe something else too.

Maybe I needed the extra weight simply because I was carrying more on my shoulders.

Maybe I needed the muscle because I needed strength to hold myself up.

Maybe I needed the fat because I needed padding for comfort.

Memories aren’t straightforward, more like fragments spiraling round a mountain, or down into a cavern- and only at the end can we see the circuitous and winding path we’ve been on. There are parts of ourselves we hide from our own eyes. And in that way, we can avoid the truth until we are at the peak or in the pit, until we are ready to truly see.

It was a strange thing to realize that my clavicle was gone. Well, of course it was still there. It was just coated in body that had never been there before. That was about 5 years ago and I certainly felt the shame my mother would have wanted me to feel. Sometimes I still do, today even, yeah. I can admit that. At least this much has changed: I can look in the mirror and say, well, I may not have a world class clavicle, this body has served me well and still so far to go, right?

It’s my body after all. Not hers. It has to live and be able to love straight-forwards and direct. I’m thankful to begin seeing this that perhaps this body, mine and mine alone, knows far better than I do.