On Jim Rockford, Ministry, Being Imperfect 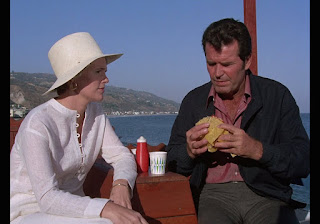 This post is all about how we just get the job done, even when it's hard, and even when we ourselves don't feel up to the task. All of us humans are terribly imperfect. We make lots of mistakes from little to big, we bump up against each other without meaning to (or somethings meaning to), and I don't know of a single person who gets any of it right all the time, or even half the time.

My minister, Meg Barnhouse, shared this post with me from her writings after I reached out with questions about how to live up to the work (something I think all of us try to do, but boy how easy is it to mess up).

The ring tone on my cell phone plays the theme from the TV show “Rockford Files.” I used to watch that show in the afternoons after school. Jim Rockford was tough, but when the bad guys beat him up he had bruises for days. Sometimes his back went out. His car was cool and powerful, a Pontiac Firebird Esprit, but it broke down sometimes. He was easy going, but it was a struggle for him to be patient with his dad and with his friend Angel, who was the opposite of his name. When he was angry he would yell, and his friends were loyal, but they tended to take advantage of him. No one on that show was all good, all powerful, no one made the right decision all the time.

He was a hero with wide streaks of humanity.

I work as a minister these days, and it’s a funny kind of job. You have to watch out or people will treat you like a hero, they might make you think you have lots of answers, you can make things happen, and that you are good good good. It’s easy to forget your wide streaks of humanity. The job itself is impossible, because people’s hearts need more ministering than one person can do, not to mention their minds and their bodies. That’s not even touching the need to research and write a sermon a week, or the meetings. All you can do is the next thing that needs doing. Sometimes it’s the thing right in front of you, but sometimes the urgent-looking thing in front of you is just a distraction from what is really important.

I like to think of being a Jim Rockford kind of minister, taking things on without too much fanfare, knowing I will have bruises and fall down on a regular basis, fairly confident that if I keep at it I can do a pretty good job. I try to find out what’s going on, I ask questions, and I try, as Heraclitus suggested in the 6th century BCE, when searching for truth to be ready for the unexpected.

My mentor Jim Rockford didn’t come across as sure of the outcome of a case when he took it. He never bragged to a client that he was the best, he didn’t like to take out his gun. Mostly he just kept at things. He pulled at loose ends until they led him somewhere. He didn’t trust people much, even kept an eye on his friends and his father, because people will do what they are going to do, and they don’t always want you to know about it. He did his job, whether it took him to the homes of the rich and powerful, to a trailer park, or to a motor court at the end of nowhere. The rich didn’t intimidate him, the powerful only slowed him down some.

Now, whenever my phone rings, whether it’s someone who has just had a bad diagnosis, someone who has an idea for something the church should do, or someone who just wants to come talk, I’m reminded of my mentor. If someone comes to me for counseling and they say “No one else has been able to help me with this,” I can answer “Then I probably won’t be able to help you either, but I sure will give it a shot.” I can calm down my inner perfectionist first-born Virgo overachieving self and hold Rockford in my mind, sliding into the seat of the Firebird, cranking the ignition and going off to get the job done, knowing that by then end I may have a few bruises, I may have lost my temper once or twice, and my back might go out. But hey, that’s the job.

It must be very very hard to be a minister, with people putting so many projections and needs onto you. Even if you try to stay off of a pedestal you get shoved up there regardless, only to have people upset when you inevitably slide off. I'm sure I'm guilty of some kind of (what's the word for the opposite of dehumanizing someone positively? Angelification?) overt uplifting to the point that the person can't live up to it and I apologize for that. People are just people, filled with bad backs, short tempers, funny jokes, keen insights, poor manners, good grammar, fart noises, grace and clumsiness, and we can only hope that some of what we do helps someone, somewhere.

I like to think that the taco Rockford was eating was delicious, and that Sharon Gless (later to go on to a cop show herself) had a good time on set with James Garner. I appreciate 70's television for it's complexity and it's humanity. And the clothes and cars were pretty righteous.