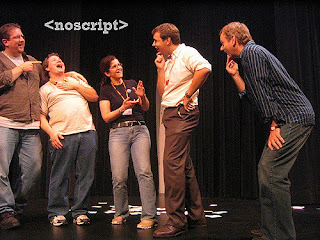 There is this moment before every show I do, where I think....what in the ever loving fuck am I getting myself into? Nothing will happen! We'll all just go out there and...zip, blank, nada, nothing.  It's probably the equivalent feeling to standing on a very very high dive and expecting that the water will disappear or something.  I don't know, I don't dive off of high things, at least not literally.

But every time, something pretty amazing happens. A story gets told by not one of us, but all of us. And the story that is created within the mind of the group is pretty much always better than the story that would have been told by just one of us. It's partly a free association thing. There is this structure within which the creative fairies and demons and perhaps Jungian overconscious, metamind, has a blast and the ideas that pop out can be mind-blowing.

Not always of course. I mean, I've been in some shows that weren't brilliant. But something always happens. There has never been a time where the story didn't form. It might have formed kind of funky, but it formed and it existed inside the structure of our group and it didn't come from just one of us. In fact, some of the more funky clunky stories occurred when one person (sometimes, heck often, me) tried to drive the story too hard, was selfish (in the sense of focusing on self, not being cruel mind you) and took opportunity away from the group.  The best shows have felt almost like floating inside of a story that I had no conscious control of at all.

And what I've learned from that is that the group is nearly always more creative and intelligent than the individual.  What I've learned about leadership?  I need to be there, leading the situation and also getting the hell out of the way and into the group.

Today for example, a retreat to plan goals and programming for the year. I had an agenda, I had some ideas, but it wasn't until the 5 of us met and let our minds open up that the real issues and needs and hopes for the year came out. The outcome was spectacular and while I think we'll have more challenges ahead of us? They will be meaningful ones, ones with potentially long lasting and positive impact.  Those ideas didn't come out of me, they came out of us.

I actually will steal an image/idea from TJ and Dave**, the ideas were sitting in the room and ether and waiting for us to sit amongst them and open our mouths and let them out into the solid world.  The leadership part is in making those idea babies grow.

I haven't always trusted this knowledge, but it proves itself to me over and over again. Obviously preparation is important. I never show up to a meeting or a rehearsal without an understand of where we might go, but I'm learning more and more to let go of the outcome with the realization that what will be created is so much better than I ever could imagine on my own.


**http://tjanddave.com/
In their documentary, Trust Us This Is All Made Up, they speak about the story occurring around them. They walk into the space and then allow the story to pick them up and carry them along. It eventually lets them go, and continues on someplace else. It's as if the story utilizes them as puppets of a sort, or inhabits them, possesses them. I really dig that idea.