Why A Women's Comedy Festival 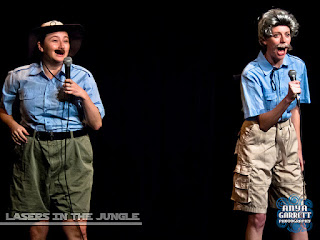 Each year that I have been involved with the Ladies Are Funny Festival, I and my fellow interviewees have been asked these questions. "Why have a Women's Comedy Festival?" "Do you foresee a time when we won't need a festival like this?"

The brief answer to the first question is because women have stories they want to tell, and there are people who want to hear them.

But there are longer answers, aren't there, especially to the second?

A few weeks before LAFF, I went to see a documentary as part of CineLasAmericas http://www.cinelasamericas.org/about-us and at the Mexican-American Cultural Center there was also a Latino play festival. While I was there I saw a friend of mine who helps curate the film festival and she's Caucasian. She says she's often asked if she's married to a Latino or if she has Latino heritage, because why would she be volunteering otherwise. I find this interesting and disturbing.

Do people ask "Why A Latin American Film Festival?" "Will there ever be a time when a Latin American film festival is not needed?" If not, why? Why ask it of women? Because women are part of all the cultures that are celebrated? Are women a culture of their own to be celebrated on their own? We see this particular issue when a movie like Bridesmaids hits it big. People ask why is it so popular, people compare it to men's comedies. Why the surprise?

I don't know but I think it has something to do with sexism. :)

It is easy to demur, giving the "right answer" in interviews, being a good girl in the face of potential conflict. That's a big part of the problem, not wanting to seem militant or pushy, right? But people don't get what they want, if they aren't being heard. If you ask, and are denied....well, being pushy is next step. Celebration is great, but there are real issues that women in comedy face. Space isn't always given. Sometimes space has to be taken, created, and that's part of what LAFF does, in addition to the celebration.

Women's stories are important and there needs to be a space for them. People who have stories focused on being women, wanting to be women, what does it mean to be a woman.... I have a need for these stories. I'm going to keep making a space for them to be told.

Cause I think it makes the world a more interesting place, frankly.
Labels: Comedy and Events